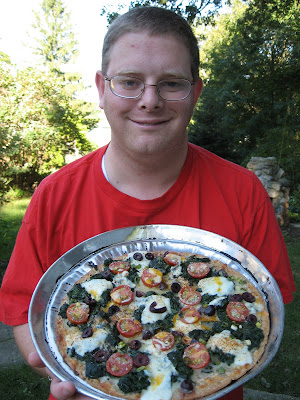 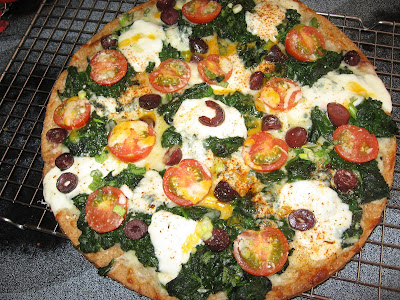 
Preheat oven to 425. Mist entire top of pizza with olive oil. Set crust on perforated pizza pan.
Sprinkle shredded mozzarella cheese evenly over top of the crust, leaving a rim if you like. (Or not!) Set aside.
In large covered frying pan, saute spinach in 1 Tbs. of olive oil and 2 Tbs. of water, just until wilted. Do not overcook. Remove spinach from frying pan immediately. Drain well and blot dry with paper towels. Chop spinach. Spread chopped spinach over shredded cheese. Set slices of fresh mozzarella on top on spinach. Next add kalamata olives, along with green onions, cherry tomatoes, and crumbled blue cheese. Top with orange cheddar cheese. Sprinkle lightly with parmesan cheese and Cajun seasoning.

looks yummy!!! i was listening to my hawaiian cd today and thinking of the fun we had at that concert. Zane sure does love to listen and dance to it!

Good luck! That does look delicious. I might force you to make me one someday. I agree with the Kalamata olives - no substitutions! DK