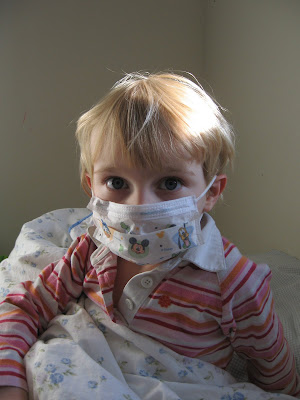 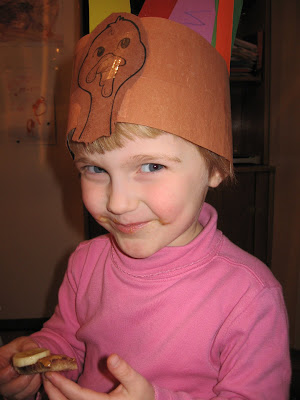 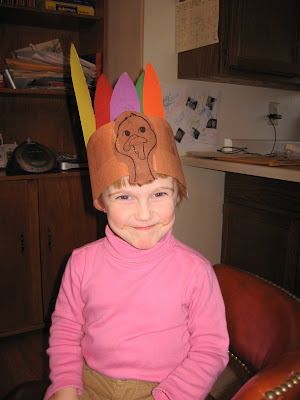 Evelyn looking festive in her turkey hat that she made at "Play and Learn," a free preschool program offered through Madison Public Schools. We go once a week on Tuesday morning.
Posted by LaLee at 6:34 AM No comments: 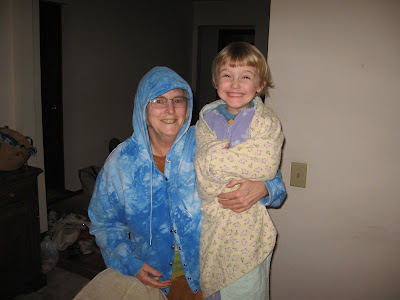 Evelyn wrapped up like a burrito in her pepe with piglets all over it. Laurie looking like the ocean in her new tie-dyed hoodie from .... SAVERS. Some things never change.
Posted by LaLee at 6:26 AM 1 comment: 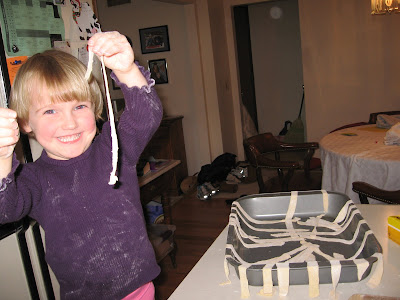 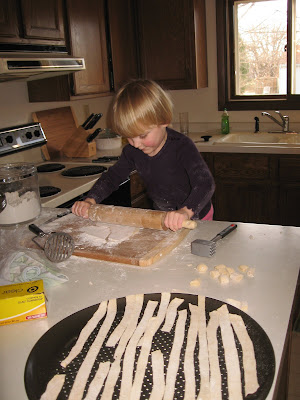 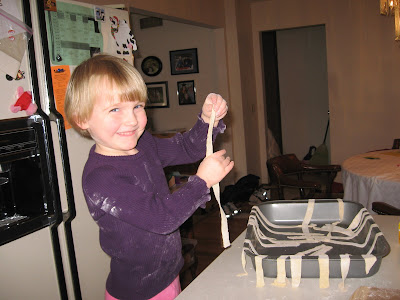 We had a great time making noodles a while back. Kevin was kind enough to load my few photos on his computer this morning. Whenever I begin the process of making a well in a mound of flour and cracking the eggs in it, I think of my grandmother, who taught me how to make noodles. I can still remember the day she taught me. We lived in Oregon. There were no children in our lives. The kitchen wallpaper, which we struggled to hang, had blue and yellow flowers all over it. My 85 year old grandmother leaned over the table giving directions as she demonstrated. Everything was "a bit of this' or a "handful of that." I couldn't help but think of her as I watched Evelyn roll the dough (and ate bits of it.) Not too long ago Jesse stood on a stool doing the same thing . Time blurred.
Posted by LaLee at 6:02 AM 2 comments:

Got up at 5 am to take Aunt Mary to the Madison Airport. I had mapped out the route and did just great. Twenty minutes there and twenty back. Very few cars out at that hour. Kevin, Evelyn and I went shopping at Target, Copps (Food) and some other places. I now know that the post office is within walking distance of their house. Evelyn and I went swimming at the nearby indoor pool. This is the same facility that is a madhouse when she goes for her lesson on Wednesday night. What a relief to go in and find only 5 other people in there. We stayed in about 45 minutes. By that time she was freezing so she sat in the hot shower while I got dressed. Weather is still 30 degrees during the day. She and I walked to the park down the street at 3:30 but it was so cold that we only stayed 10 minutes. Way too cold. I will eventually figure out when to go outsidfe and when to stay in the warm house.
Posted by LaLee at 6:14 AM 3 comments:

Departed at 9:45 with Evelyn and drove 15 minutes north of Middleton to Waunakee where a young mother with three kids had invited Evelyn for a play date. It was amazing to drive 10 minutes from Jesse and Kevin's house and be in farm country complete with silos, barns, cowns, plowed fields, tractors,.... Waunakee looked like a once very small town that was built because a railroad came along. Many WI towns have tracks paralleling Main Street. Now Waunakee is a suburb, mostly a bedroom community for Madison. I enjoyed seeing the countryside. The color of this type is the same color of the corn stubble I passed.
Posted by LaLee at 6:34 PM 1 comment:

Evelyn and I began walking to a nearby bakery at 10:30 am. It wasn't far but it was 30 degrees. Once inside she was easily distracted by the candies, cakes, and a giant gingerbread house that she sat in. I wish I had taken the camera. We arrived home at 11:30, just as it began to spit snow. By 12:15 it was snowing hard. That lasted a good 45 minutes, then the sun came out and melted everything. Weather is very changeable and grim. Until arriving here I had never seen a Dora the Explorer Cartoon. Evelyn is hypnotized by them and the library has quite a collection... so yes, I am letting her watch cartoons when I run out of energy. She has been great. Very sweet and pooping and peeing right where I want her to. Yeah!!
Posted by LaLee at 7:09 PM 2 comments:

Left Middleton at 3:30 after Kevin had his eye appointment. Drive was uneventful and not too bad. We began in congestion, drove thru 25 miles of farmland, then back into sprawling traffic. Jesse loves seeing Evelyn. The two of them are in the shower together as I type. She looks good and seems to be in pretty good spirits. Evelyn and I will be going to a nearby hotel for the night. Kevin has a fold up bed and can stay with Jesse. Tomorrow morning we will return to the hospital for more visiting then we will return to Madison. Evelyn and I made flat bread this morning. She ended up with one piece to play with and had a great time rolling it, squishing it and pounding it with a meat tenderizer. (We ended up a throwing her piece away.) Aunt Mary came to dinner last night and helped Evelyn and me rake the back yard. It was 50 degrees then, almost balmy compared to some of the 20 degree mornings we've had.
Posted by LaLee at 3:43 PM 1 comment:

Evelyn woke up at 6:15 and came to play with me. We have Jesse's eggcate mattress from the Madison Hospital on my bed now. It is great. I slept better last night than any other night. Kevin is in the shower and before too long we are taking off to Milwaukee to visit Jesse. She will remain in the hospital up there till Turnip joins us. It is an hour and a half away. She traveled from Madison to Milwaukee by ambulance late yesterday afternoon. Weather has warmed up to 40 and is much warmer than yesterday. Yesterday I took Evelyn to a playgroup that is sponsored by Madison Public Schools. There were 25 kids there. But it was fun and nice for Evelyn to see some friends. She was especailly attentive during snack time!!
Posted by LaLee at 6:21 AM 2 comments:

Am sitting in Jesse's hospital room while Kevin pushes Jesse and Evelyn around the halls in a double wide wheelchair. It sounds like a decision might be made tomorrow as to whether Jesse returns home or travels to Milwaukee for the rest of the pregnancy. No decision as of yet. From her 6th floor window I can see two older brick buildings that look like old schools. In the distance the tops of brown trees with clouds and blue sky floating above. Woke up this morning to 20 degree weather, but it only seemed like it was the low 40's due to the lack of humidity. My foot is 100 % better here than in RI. That tells me that most of my foot problems are due to arthritis. This morning Evelyn and I took a shower together and she screamed when it was time for her to get out. She had a dental appt. at 9 am. Since this was her first visit to the dentist, she was a bit apprehensive. All they did was clean her teeth!! She came out smiling, gripping a toothbrush in one hand and a toy in the other. While she went to gymnastics with Kevin I went to Cub Foods and bought food for a week. I made a weeks worth of menus last night, so I knew what to get. Evelyn does not like casseroles, so the menu is pretty plain. Tomorrow night we are having her favorite ... pepperoni pizza!!! All of you who know me as a timid driver would be very proud. I've driven to church, to the grocery store and even to downtown Madison. No problems and it's a stick shift!! My day began at 4:30 am. I guess my body is still on RI time. So although it's only 1:20 I'm going to stretch out on Jesse's bed and get some rest.
Posted by LaLee at 11:04 AM 2 comments:

Chicken Curry in a Hurry

Heat oil in a large skillet. Saute onion for 7 minutes. Sprinkle with curry powder and cook for 1 min. Add yogurt and cream and simmer for 3 minutes. Stir in seasonings and tomatoes. Re-move from heat. Shred chicken and add to curry. Spoon over rice.

These recipes will be needed in Wisconsin.... thus the appearance of 3!!
Posted by LaLee at 7:53 PM No comments:

mix together all dry ingredients and fruits/vegetables in one bowl. Mix all wet ingredients in another. Stir everything till it is just mixed. Fill muffin cups 3/4 full. Bake 350 for 15-20 min.
makes 15 muffins
Posted by LaLee at 7:43 PM No comments:

I'm not writing the instructions.. ran out of time. The ingredients are listed for me. Check out the magazine for complete instructions. Makes 4 pieces of flatbread.
Posted by LaLee at 7:39 PM No comments:

Just made a reservation to fly to Madison on Saturday. Jesse has been hospitalized for 5-7 days. Then they will figure out what to do next. See her blog. Tomorrow will be spent getting ready - banking, washing and packing.
Posted by LaLee at 7:32 PM No comments: 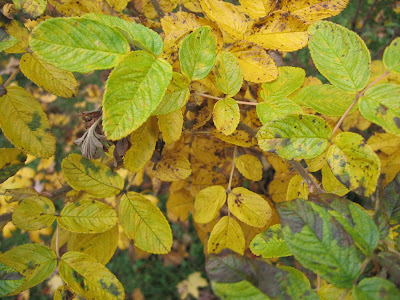 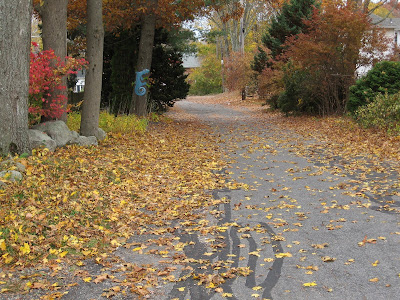 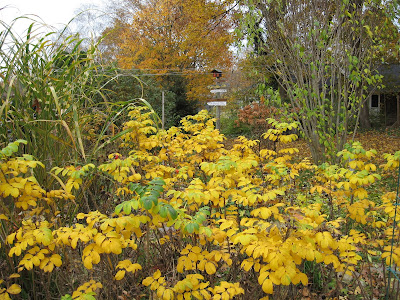 Last night my world turned yellow.
Today the yard was alive, gasping.
Fighting to hold its own. 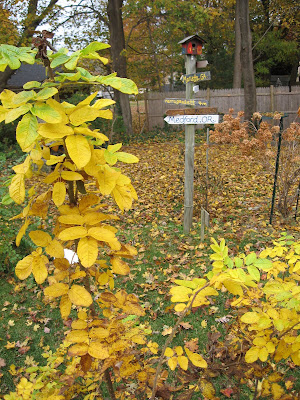 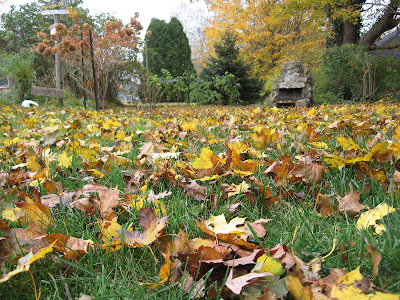 By sunset the battle was done .
Posted by LaLee at 1:41 PM 2 comments: 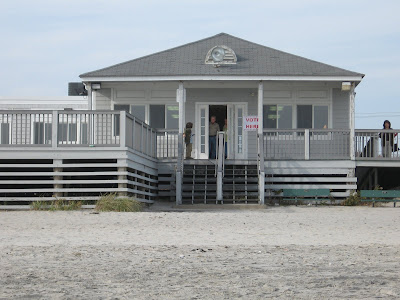 This morning as I drove John to an eye appointment in North Kingstown, I noticed a "Vote Here" sign on a three story brick building across the street. It was the North Kingstown Town Hall, built in 1888 and still in use. Very picturesque except for ugly power lines that ruined my view. I forgot my camera but the image of that grand town hall was the first polling place I noticed today. On our way home we stopped at our own polling place, a one story flat roofed brick elementary school built in the 50's. Not much to look at on the outside, but filled with charm on the inside. We voted in the cafeteria, which was built for about 150 kids, very small. Lucky for us, our named began with a B. There were two lines. The first half of the alphabet, A thru K, had no one in line. The second half, L thru Z, had 25 people, waiting. After seeing the national news tonight, I guess we were fortunate not to have to stand in line for hours. We were in and out in 5 minutes. One block from our polling place I passed another "polling place" sign at the venerable stone walled town hall in South Kingstown. My friend, Sarah, who used to work in the clerk's office, explained that anyone who was not registered could go to the Town Hall and vote ONLY in the presidential race. The parking lot was full and cars were waiting to turn in. The last polling place I saw was my favorite. The Canochet Club, a building that sits right on Narragansett Town Beach, had a red and white "Vote Here" sign next to the door. Can you imagine going to the beach to cast your ballot???
Posted by LaLee at 5:26 PM No comments: 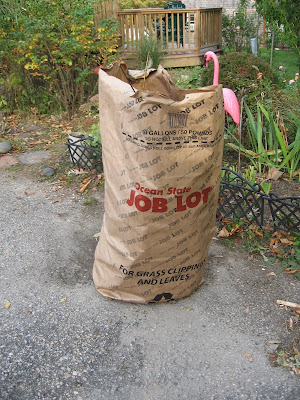 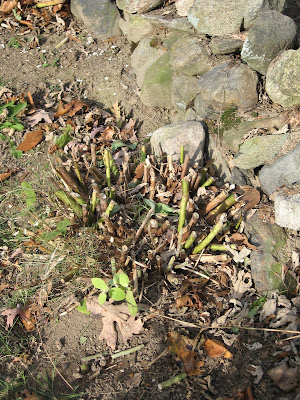 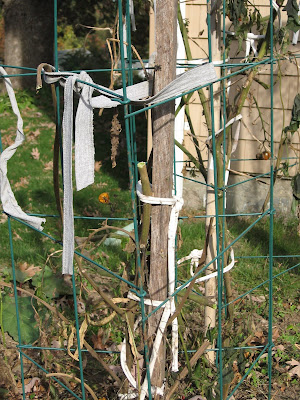 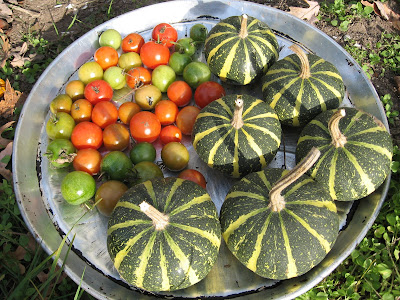 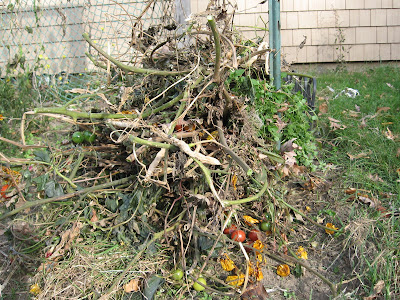 Every fall my final garden rituals are slowly and meticulously performed. Two weeks ago, with sun warming my back, I picked the last of the tomatoes and gourds. Untying the tomatoes used to involve saving the cut up pieces of t-shirts and washing them. This year all the moldy cotton strips were thrown out. My hibiscus flowers (marshmallow plants) that bloomed so profusely in the hot months were cut 8 inches above the ground. All the yard waste was crammed in bags and taken to the dump. The garden looks bare.
Posted by LaLee at 4:49 PM No comments: