Finally sleeping the whole night through and not waking up at 4 am. Can't believe how green RI is. The vegetable garden needs weeding and that is a top priority. Teddie, Josh and Theo were here for 5 days when I returned, so it seems very calm with them gone. He reminds me of the sweetest elf in the world, always happy and cooing like a bird. Hard to get anything accomplished with him around, but definitly the most appealing distraction I've ever had.
Posted by LaLee at 6:34 PM 6 comments: 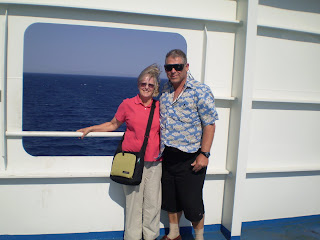 Does Laurie's hair remind you of anyone else, Teddie? 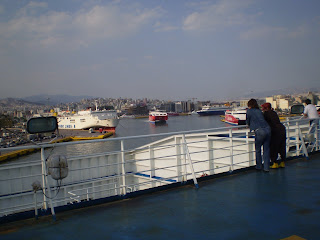 View from the back of the ferry as we approached Athens. 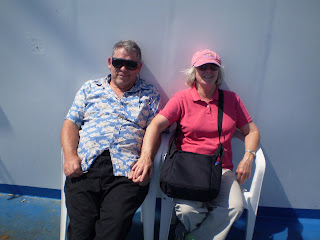 Lounging on the back deck of the ss Knossos Palace 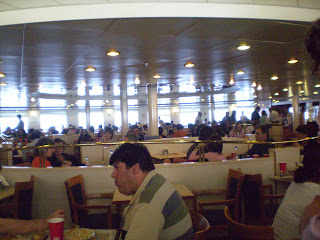 This is the view of one of the four dining rooms on the ferry. Packed. 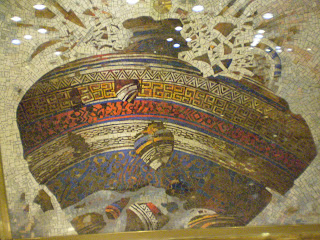 This was a mosaic in the reception area of the ship.

Ride back to Athens took 7 hours. Calm seas. Kids runing all over the decks. At least 2000 passengers traveled from Crete. All heading home after the two week Easter vacation.
Posted by LaLee at 11:19 PM 1 comment:

Am in the process of posting pictures from our trip. Please scroll down to check older posts. Will try to post more tomorrow. Arrived home safely Sat. night at 8:30 pm. Click on photos to see more details.
Posted by LaLee at 7:04 AM 1 comment:

After strolling on the harbor we headed up a main street, thronged with people, to find a place to eat. Not an eay task with so many choices. On the way we saw the beautiful church of Agios Titos with what looked like a wedding party. It was 7 pm. We sat down to watch. Standing on the steps of this ancient and beautiful structure was a handsome young man in a dark suit, with a bouquet of white roses. As the guests arrived they would go up on the steps, greet the happy fellow with a kiss on each cheek, and have their photo taken with him. There was a big plaza in front of the church and lots of other uninvited guests were watching and taking pictures, too. There were two boys even kicking a soccer ball around, until the bearded priest shooed them away. We chatted with a young couple who explained what was happening. The woman explained that the bride is traditionally late for her own wedding, to build a bit of suspense. Eventually, around 730, we heard honking and the photographers ran to the street. More suspense. By then the hundred or so guests had lined up on either side of the church steps in a two single lines, stretching toward the road. The bride's mother ran forward, adjusted her gown, then her brother escorted her across the immense plaza to her waiting husband to be. All the while the guests were clapping. Eventually the throng followed the bride and groom into the church. We left feeling very happy!! Photos to follow when we return to Athens.

The other unexpected event was that we attended the opening night of an art show in an old basilica, on the same road as Agios Titos Church. Was fun to see the art, but I wa unimpressed. Every painting related to fish. Still it was fun to see the inside of the basilica.

Scenes from the Heraklion Harbor 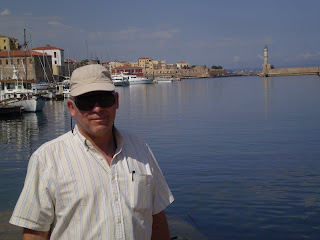 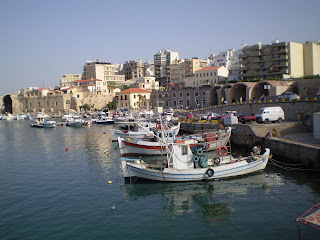 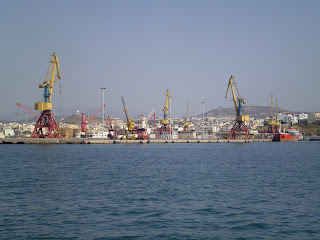 These were posted for Evelyn and Ted. 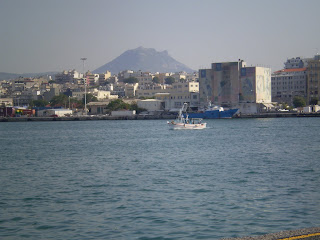 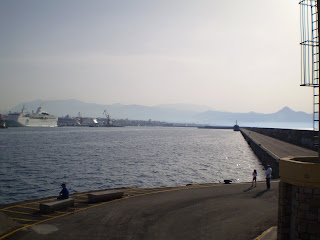 This is the view from the lighthouse at the end of the breakwater walkway in Heraklion. 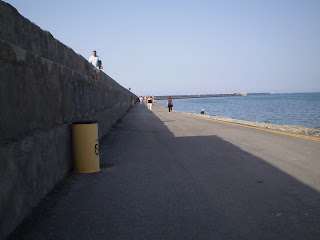 This is the view half way down the breakwater walkway. Click to see how long this really was. 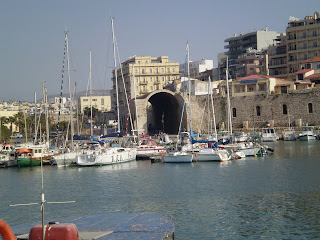 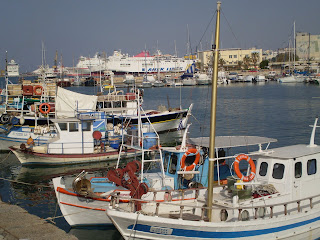 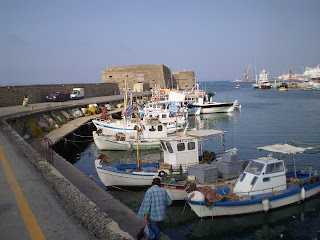 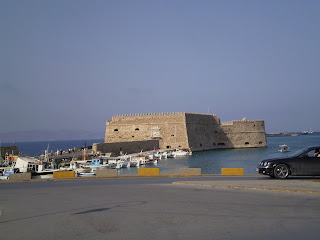 Last night we strolled down to the Venetian Fort, a reminder of when the Venetians ruled the area. A great place to walk. We had no idea there was a walkway or breakwater past the fort and ended up walking for two hours, past boats, cruise ships, and lots of other walkers. Most of the men we passed were twirling their worry beads! (As many Greek men of all ages do) Once we reached the end of this more modern walkway we were near the airport and were shocked at the number of planes taking off and landing. About every three minutes. Also spent quite a bit of time watching a tiny PILOT boat do it's job as the humongous cruise ships pulled out of the harbor. Photos to follow.
Posted by LaLee at 10:38 PM No comments: 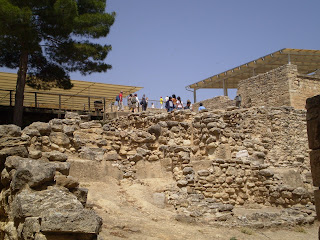 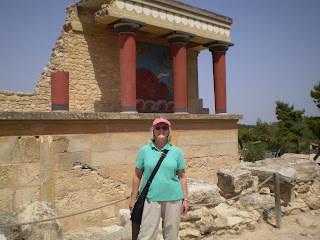 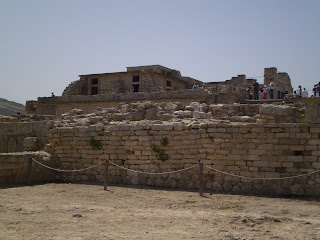 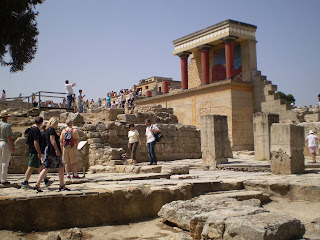 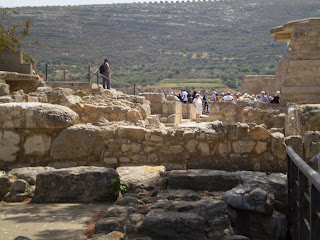 This was my favorite shot of Knossos, because it showed the surrounding countryside, which was all agricultural.

Once we registered at the Irini, we got on a local bus that goes to the ancient site of Knosses. Most of the people boarding at the beginning of the run were Germans, with cameras and tour books in hand. Bus picked up local passengers along the way and was crowded by the time we arrived at the site 30 minutes later. My sister in law had given me a book two years ago called The Find of a Lifetime. It told the story of Sir Arthur Evans, a British gentleman who excavated and partially restored Knosses from 1900 - 1930. I read the book two weeks ago and was thrilled to be visiting the site. I also studied it long ago as an Art History major. What a site. Buildings built by the Minoans in 1500 BC. Jam packed with tourists, but the site is so big, that we did not feel like we were in a mob. The land outside the site has been preserved and made for a gorgeous setting. Took local bus back to Iraklion. Watch for photos when I find time, maybe Monday.
Posted by LaLee at 5:48 AM 1 comment: 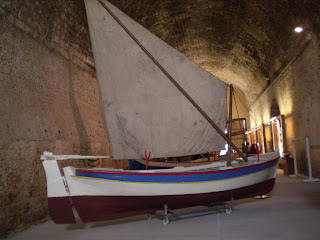 A nautical museum inside a restored Venetian boathouse. This was a working model of a Minoan boat. 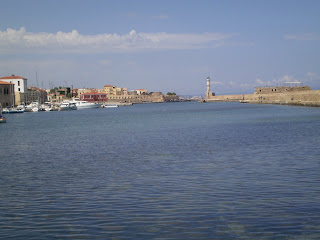 This photo is actually of Hania!! Note Venetian tower at the end of walkway. Photos below show more of this tower. 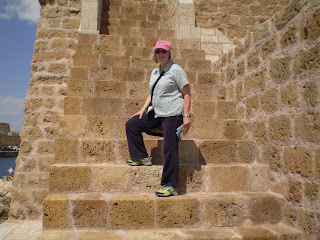 Steps for a giant. 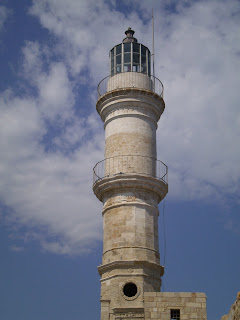 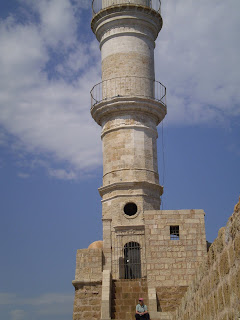 I got confused. The above photos are all of Hania harbor, not Heraklion.

We are becoming adept at riding the KTEL buses on Crete. We walked to a small market in Agia Peligia where we caught the bus to Heraklion, the largest city in Crete. The bus ride was only 30 minutes. Someone had told us not to stay in Heraklion, that it was just a big city. It is a big city, but nothing as big or dirty as Athens. Much more greenery and the buildings are not as high. A mix of old and new buildings with open plaza every so often. Some parts were very congested with traffic. We walked around and found a hotel within four blocks of the ANEK ferry port, where will leave from tomorrow morning. No view and no pool, but Ted is thrilled with the high powered air conditioner! At the moment I am sitting at a computer at the Irini Hotel while Ted naps. To be honest, we are both a worn out with the hard beds and aren't sleeping as well as we'd like. Tonight we will walk the harbor walls built by the Venetians long ago. The next blog will tell you where else we went today. PS The bus today dropped us right at the port, not on the side of a mountainside.
Posted by LaLee at 5:36 AM 2 comments: 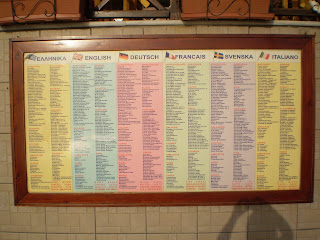 Menus were posted outside each taverna. This one was posted in 6 languages. This was a vacation spot for people from all over Europe. We heard lots of German and Swedish being spoken.

Beach at Agia Peligia. Boardwalk area was filled with Tavernas. 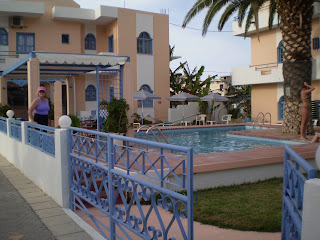 Our apartment in Agia Peligia 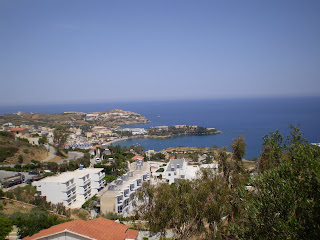 View from the highway of Agia Peligia.

We departed from Hania yesterday at 800 am from the KTEL bus station which was 6 blocks from our hotel. Our desination lay somewhere past Rethymon on the Northern Cretan coast. The bus trip was not quite the type we imagined. It did not stop at the local villages, rather on the side of the highway. Our ticket read Agia Pelagia, which was what we wanted. It is a resort right on the water. Only problem was that we were dropped 3 km. from the resort on the highway at the top of a hill. Down we went, dragging our suitcases behind us. Narrow road. An older gentleman from Cyprus walked down with us. We were hot when we arrived at 230 pm. Next order of business was to find a hotel or apt or room... We got lucky and stayed at a very picturesque apartment. It had 2 balconies, a kitchenette, a swimming pool and was very quiet. One block from the beach and the dive shop. The best surprise was the price 30 euros, or about 45 dollars. We relaxed on the beach, which was crowded up till about 430 pm. Once the beach cleared out, I swam in the sea. Had a nice dinner of Cretan food, at a taverna right on the sea.
Posted by LaLee at 4:31 AM 1 comment: