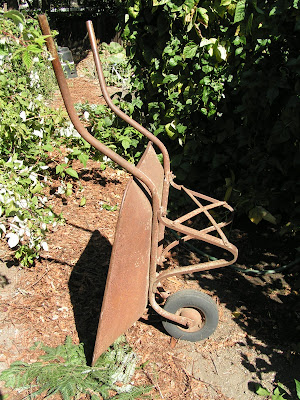 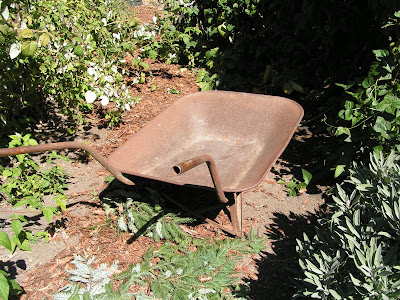 My parents have had the same wheelbarrow for 58 years, having bought it when they moved into their first and only home. This rusty one wheeled tool has quite a story. My dad and the next door neighbor bought the then very shiney green wheelbarrow together. "We each paid 16.00," my dad told me, "and when he moved I had to pay him 16.00 to keep the wheelbarrow." When you see the photo of this rusty contraption you may not recognize it. Wheelbarrows have become better balanced and easier to manage than they were when I was two. I am in the process of trying to get my dad to get something new. "Why should I?" he says, "it's worked for 58 years." "It would be so much easier to handle," I say, but so far my efforts have fallen on deaf ears. We are going to Home Depot later in the day and he has agreed to LOOK at the new wheelbarrows. That's progress.
Posted by LaLee at 11:28 AM

Why in the world does he need a new wheelbarrow? That one has worked for 58 years! This doesn't sound like the Laurie I know... :)

Well we still love her.