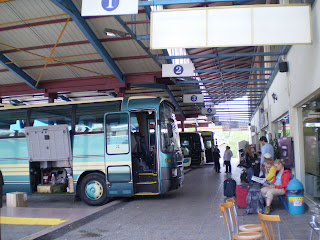 Our trip to Monemvasia was great. The bus ride there was interesting as we wound round tiny villages off the main highway. Monemvasia was everything the 1995 book said it was. Altho they neglected to say how good the food was!! Only problem was that on the way back disaster struck after 6 hours of riding on four different buses in hot weather. I got careless... and left my orthopedic pillow with it's custom made cover on the last bus. Bus number 51 that runs from Terminal A to Omonia. We discovered the loss at 9:00 pm as we were just about ready to board the metro home. We both froze, but Ted regained some sense of what to do. We were talking to metro police, metro workers, then we rode back to Terminal A and checked with anyone there who could speak English. No success. Then back to the Omonia stop and waited for all buses to run throught the stop, checking each one. We still had not had anything but candy bars since 3:00. Running around Athens in the middle of the night, Ted dragging our suitcase was no fun. Lots of weirdos, but we never felt in danger. I felt awful as we dragged into the apt. at 11:30, after 9 hours of traveling and runnhing in cirles. This morning one of Ted's Greek speaking co-workers called a number we had been given and to make a long and miserable story short... I rode to downtown Athens twice today in 88 heat. The last trip was a success and I rode home on the bus with my cool pillow right where it belonged. That's why there are no photos on Momenvasis... yet. Tomorrow.
Posted by LaLee at 9:53 AM

Sounds like a fun trip! Glad you got your pillow back.... that wouldnt have been very fun if youd lost that on your return trip!

Yikes - you need to have that pillow velcroed to your posterior! Sounds like the trip made the whole calamity worthwhile. Looking forward to the pics. DK