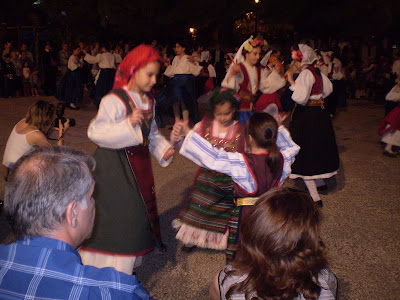 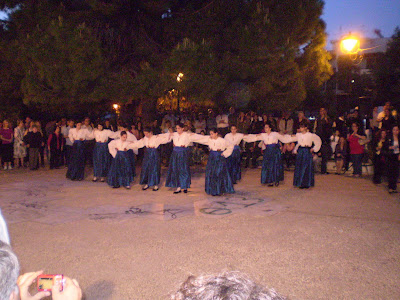 Mother's Day was enjoyable. Ted and I caught the 407 to church and gave our talks at Sacrament Meeting. That went well and was not as nerve wracking as I expected. It is much easier to speak to a smaller group. Since it was the second Sunday of the month, our branch had its' regularly scheduled potluck after the three hour block. The food was delicious. The company is always good!! We then walked to the bus and went to the pool so Ted could check the chemistry and temperature, arriving home at 3:45. Rest time till 6:20, when we were out the door again to catch the 407 back to church for a one hour presentation by 20 missionaries. They did a great job. Hopefully Ted will post a video he took of them singing a hymn in Greek. By 8:10pm we were back on the bus, but stopped at the local square first. Mother's Day is a big holiday here and there were children doing Greek dances for hours at this square, in all kinds of traditional costumes. There were hundreds of spectators. What struck me was the continuity of tradition in this society. I'm sure many of the gray haired men & women who were watching the show danced the very same steps long ago. All the dances were line dances. Again I was struck by how united the whole picture was, arms linked, spectators clapping and singing. I could think of nothing to compare in the US that brought everyone together in the same way. Ted took videos of that, too, but we're not sure they worked. (It was dark and there were a lot of bright streetlights) We arrived home at 9:30.. A long, but pleasant day.
Posted by LaLee at 2:44 AM